We usually envision a micro budget feature as a story presenting a confined world, restricting a small cast to one or two locations. But Crushed expresses grander aspirations, evident from the opening aerial shot over a sprawling vineyard, the subsequent scenes indulging in numerous locations across a rural town and the casting of name performers.

For a team working on a first feature – including writer, director and producer Megan Riakos, producer and star Sarah Bishop and DOP Michael Steel – this commitment to play it big without yielding to the lack of budget and production time epitomizes the spirit of Crushed.

For Megan, the captain of this ambitious expedition, following a mix of progressive study in media, directing and screenwriting with extensive experience on set in Australia and the US, making a feature was the next step in her personal journey. But she was not keen for a long and uncertain development period under a traditional funding model, so she explored what could be accomplished with a DIY approach.

While Megan had written a couple of feature scripts, she was wary about how their scope would provide complications stretching the limited resources this first time around. This timed well with her acceptance into UCLA’s Screenwriting Extension course, where she found the ideal conditions to start a fresh narrative she could design to spec.

Recalling a visit to a friend’s winery in Mudgee, Megan confirmed the availability of the location for filming before she started writing her story. With ongoing feedback from her online UCLA cohorts, Megan completed her first draft in ten weeks.

It’s a raw, murder mystery thriller set in rural Australia. When a winery owner dies, his estranged daughter returns home to repair her family ties. When her mother is arrested for his murder, the daughter undertakes a dangerous investigation to uncover the truth. One of the creative draws for Megan was to go against the norm of a light toned narrative we might expect to see in this idyllic setting, instead evoking a dark underbelly of secrets.

Crushed was able to attract this formidable ensemble of performers with a solid script and a confident attitude that let actors know this was an ambitious project with a full professional crew. Sarah Bishop had worked with Megan previously on a short film and fits perfectly as hero Ellia. Les Hill was Megan’s first choice for the role of David, and when a ‘friend of a friend’ helped them connect, Les agreed to read the script. Meanwhile Roxanne Wilson, who Megan had met at an industry event in LA, was fortunately returning to Australia for a brief period that coincided with the shoot.

Mudgee proves to be an inspired choice of location because it has a small country aesthetic, but it still provides suitable amenities – options in accommodation, catering and hardware supplies. But limiting funds and a truncated schedule did present challenges. Megan praises the short hand, understanding and trust she had developed with her key collaborators on other films for being able to circumvent these.

Working alongside DOP Michael Steel for the third time, the crew were averaging thirty-five set ups a day. Editor Anil Griffin was available to attend part of the shoot in Mudgee, where he could log rushes, alert Megan of anything that was missing while making bold strokes on first assembly while she was on set – this wouldn’t be possible if they hadn’t worked together twice before. Nor would she feel comfortable allowing composer Aaron Henry to score the film in New York if they hadn’t previously collaborated.

What does 2016 hold for Megan? While she has a slate of scripts behind her – including award-winning effort The Last Reprieve – Megan is keen to keep writing fresh material, while finding her next feature project to direct. As for Crushed, its now midstream in its festival release strategy, which has already attracted awards and praise, promising signs for its international release later this year. 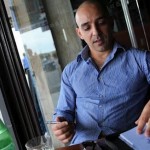 Nick Triandafyllou
Nick is the founder of Mango Tree, a boutique story company in Sydney specialising in Screenwriting and Copywriting. His feature film projects include Unforgettable (comedy) and The Fence (sci-fi, thriller), and he has served as Script Consultant for The Hunter's Club (action) and Crushed (murder mystery). Nick provides feedback in all genre, and coordinates a monthly script feedback group in Sydney. Check out his projects and services at www.mangotreestory.com
Related Posts